Let’s Make it Official: Starbucks Should be the Next Big Thing In Coworking When 6 out of 10 of the world’s most valuable brands are tech companies, you can understand why non-tech consumer brands would want some of that tech fairy dust to rub off on them.

The Starbucks highlight reel is full of examples where the brand has used technology to connect with their customers and give them the best experience both in-store and online. Chief Digital Officer Adam Brotman has pushed forward a digital strategy that smartly combines web, mobile, social, and in-store to make them one of the most tech-focused food and beverage brands. They made a $25 million investment in Square, using their technology to power their POS system and the CEO of Starbucks took a year-long board seat at the payments company. The Starbucks mobile app is one of the most downloaded from a food and beverage company, with mobile payments making up 14% of their in-store sales. They’ve rolled out wireless charging stations in some Silicon Valley locations and their Clover brewing machines are controlled from the cloud.

Starbucks has also been acquiring companies and taking steps to make themselves more than the place where you get your morning coffee fix. They’ve  introduced beer and wine in select locations to extend patronage into the evening and acquired La Boulange bakery to improve their food selections. Since acquiring Teavana, the chain is taking advantage of America’s growing tea culture by opening Teavana Fine Teas + Tea Bar locations in both New York and Seattle.

But Americans still spend the largest part of their day doing one thing — working. And as more people embrace freelance careers and entrepreneurship, the need for permanent office space has declined while the hunt for flexible workplaces has risen.

So what should be next on the Starbucks digital innovation and venture roadmap? Coworking spaces.

Coworking and the new gig economy

I live in a building that has a Starbucks in the lobby. When I go downstairs for my daily macchiato, I run into startup founders, I overhear lots of business chatter, and I can look over at the next Macbook and see lines of code being written. I’ve been known to take many meetings over a latte or bring my work there for the silent companionship that I can’t get at my home office. Starbucks isn’t just for coffee anymore. It has become the de facto workspace for the creative class and in urban cities like San Francisco, it is a gathering place for entrepreneurs, freelancers, and anyone who doesn’t need to be tethered to a desk.

According to an Intuit report on the future of small business, over 40% of the US workforce will be freelance, temporary, part-time, contract, or specialists by the year 2020.

The US government hasn’t counted this growing sector of the workforce since 2006, but even then, there numbers were impressive — 42.6 million or 30% of the total workforce were these non-permanent or contingent workers. Today, more than 80% of large corporations report that they plan to increase their use of contingent workers in the coming years.

A growing number of entrepreneurs and CEO’s have begun to embrace the ‘coffee shop as office’ concept not only for themselves, but for their employees as well.

The shift to mobile devices and cloud technology combined with the ubiquitous availability of broadband has made location flexibility feasible for many more types of workers. Technology has helped make the worker sitting in a Starbucks in SoMa just as connected as the one sitting in her cubicle. She can share documents using Dropbox, use the Asana app to update you on her progress from her smartphone, and be an active part of your weekly team meeting via Google Hangout.

The future of work is more independent than ever before and as the global workforce shifts to freelance, many of them will be looking for a place to set up shop.

How much better could Starbucks make that experience by taking the office hack that people are already doing and improving the time that workers spend in their location?

The business model behind coffee + coworking

Starbucks branded coworking spaces would exist completely outside the current retail locations and provide flexible workspaces on an hourly, daily, weekly, or monthly basis. And of course, the coffee would be discounted with a monthly pass.

These spaces would be customized to meet the needs of the technologically savvy and  untethered worker. Desks and seating areas that are more conducive to spending long hours in front of a laptop. Nooks with privacy screens for more intimate conversations. Faster wi-fi. Better lighting. More power outlets. Please god, more power outlets. Allow customers to both pay for their coworking time and order up a frappuccino directly from the Starbucks mobile app.

These coworking spaces would merge the independent worker’s pre-existing affinity for the Starbucks brand with more desk space and the human desire for community and camaraderie. Independent workers have already adopted Starbucks as their unofficial office space and they will pay for something they’re already doing for free if it provides a better experience.

Challenges of real estate and operations

Coffee plus coworking isn’t a new concept. The biggest challenge has been getting the economics to work out. And despite what you might see in your neighborhood coffee shop, Starbucks isn’t in the coworking business, they’re in the coffee-selling business.

Running a coworking space isn’t a trivial task. There are both real estate and operational challenges to consider. The larger footprint required would mean increased real estate costs for the company. Coworking spaces would need to be located in urban business corridors where their storefronts can generate foot traffic with street frontage and prominent signage.

Starbucks is great at running coffee shops, but bona fide coworking would be a new concept. They could partner with a company whose business is coworking to manage the operational aspects that make these spaces work. The partner would contribute market knowledge, operational expertise, and agility while Starbucks contributes the firepower of a global brand.

Started from the Bottom: Garages to Coffee Shops Even though technology keeps us constantly connected, I can tell you that being an independent worker can be a lonely business. There is no office water cooler where you gather to exchange industry gossip, trade contacts, or help your fellow worker. Social media and industry blogs give back some of those connections, but shared working spaces foster those face-to-face interactions that create community and help those in the new economy remain connected to other professionals.

Creating this new type of Starbucks experience is less about coworking or even about freeing up space in the retail stores taken up by customers who camp out for hours at a time. It positions Starbucks as a brand that understands the modern consumer and the place of work and community in our evolving lifestyle.

The tech company that started in a garage is a very Silicon Valley story. Apple famously started in a Los Altos garage. Google started in Susan Wojcicki’s garage in Menlo Park. Much further north, Jeff Bezos started Amazon out of his garage in the suburbs of Seattle.

With more people starting tech companies and barriers to entry lower than ever, the next wave of startup mythos could very well be the story of the billion dollar company that started in a Starbucks.

Starbucks, when you roll out these coworking spaces, I only have one request: don’t make the music suck. 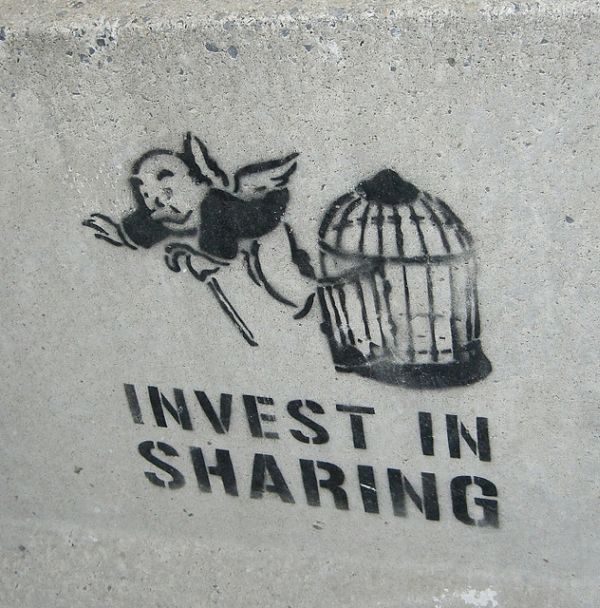 Getting a Piece: Brands and the Sharing Economy

I was at an event a few weeks ago where General Motors debuted the new Cadillac ELR -- a plug-in electric coupe done with all the[...]