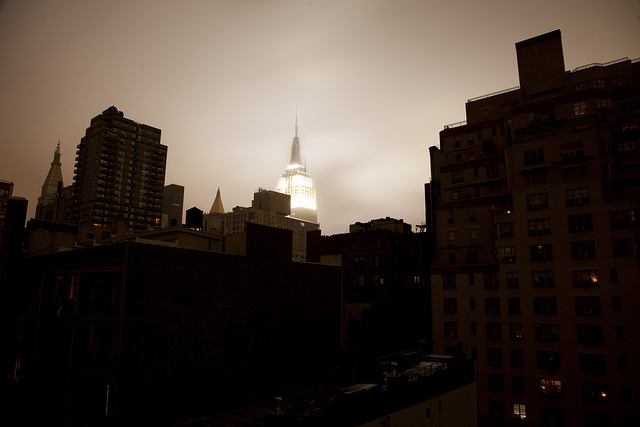 As soon as PR and marketing folk hear about a major storm or act of nature that will inundate the news cycle for days if not weeks, we start thinking of ways that our brands can ride that wave of coverage with PR campaigns of our own.

In 2010, Lonely Planet saw a spike in mobile downloads when they gave away free mobile city guides for travelers stranded due to the eruption of Icelandic volcano Eyjafjallajökull.

But American Apparel brought on the ire of…well, pretty much everyone by launching an email marketing campaign around the impending superstorm and sending out a “Hurricane Sandy Sale” email blast. The reaction on Twitter was swift, resulting in negative press and social media mentions When it is a life-threatening disaster on the order of Hurricane Sandy or the Japan earthquake, how can companies stay away from being labeled as brash opportunists and spread the kind of corporate goodwill that gets ink and pixels?

Proctor & Gamble is famous for rolling out the Tide mobile laundry trucks post-disaster. Since hurricane Katrina, the Tide Loads of Hope truck has helped people without access to clean water do their laundry in cities like Galveston, TX after Hurricane Ike and Fargo, ND when record river floods left the city under water.

If you don’t have a much-needed service, partner with someone who does. Banking giant Chase partnered with Moxy — a startup that provides cellphone charging stations — to bring their stations into an NYC branch and provide 8 million New Yorkers who were out of power with a place to charge their mobile phones.

Netflix got a ton of press coverage by just talking about the facts — that video consumption increased during Hurricane Sandy. With businesses closed and school suspended, viewership was up 20% nationwide and more than 100% in areas of the Northeast that were riding out the storm.

I would guess that lots of streaming and video-on-demand services saw an increase during the storm, but Netflix got the attention by being on top of their consumption trends and simply reporting on the numbers.

Be business as usual

Thousands of businesses were halted or severely limited during the storm, but the ones that stayed in operation got the attention and gratitude on New Yorkers in need. Food delivery service Seamless kept customers full of hot meals by having an ‘all hands’ customer service strategy where employees from other departments had been pre-trained in customer care and could easily pitch in to handle customer calls. CEO Jonathan Zabusky and his story of operational mountain-moving is impressive.

If you have a business that people count on and can be agile enough to remain in operation during a natural disaster, the best PR for your company is this: keep doing your job.

The way you behave in a disaster tells people what kind of company you are. Throughout the storm, there were NYC companies who sent out great emails that highlighted their resiliency and dedication to customers. Other retailers ran promotions that tied their sales to a Red Cross donation.

These companies gained the respect of their customers and millions of dollars in positive print by marketing with tact and empathy. There are lots of ways to market during a natural disaster and still remain sensitive to those affected.

The 80/20 Rule of Affiliate Management

In managing affiliates, which of your actions make the most difference and how can you maximize your impact? Pareto's Law? It appli[...]