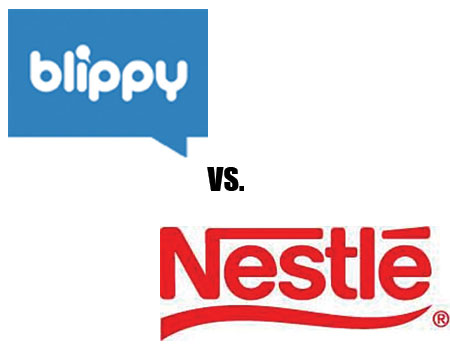 Blippy and Nestle have both been in the middle of a PR nightmare over their business practices, but it’s how they each handled the negative attention that set them apart.

Blippy, a social media site that allows users to share information about their purchases by tracking their credit card transactions, recently had the best of days and the worst of days. Best because they raised $11.2 million in new funding. Worst because on the same day, VentureBeat revealed that the company exposed several users’ credit card numbers in Google search results. More on the credit card leak via Venture Beat.

Blippy completely screwed the pooch in so many ways, but there are a few areas where they got things right.

They owned up to the problem

Soon after the news broke, Blippy released an official statement from co-founder Philip Kaplan admitting that there was an issue.

While it didn’t help that their statement was anchored by a quote from Kaplan saying, “It’s a lot less bad than it looks”, it was important that they addressed the issue quickly.

One of the most important things that Blippy did right is to say “I’m sorry” — both privately to the four users affected and publicly to all users.

We take this very seriously and are deeply sorry for the extreme inconvenience we caused to the 4 affected users. We will help make sure they are minimally affected.

Blippy will continue to take its lumps in the media, but users want a site that they enjoy to succeed and a corporate apology goes a long way with the people who actually use the site.

They were transparent but not stupid

The Blippy blog was being updated almost daily to give users the official status of the problem and the steps they were taking to fix it. Blippy had the conversation on their turf and didn’t allow their message to be diluted by negative comments.

In most cases, I’m against blogging with comments off, but in this instance, I think it was important that Blippy got to control the message in a venue where they could moderate the conversation without allowing it to devolve into a flamewar.

They laid out a roadmap for the future

Blippy took to their blog again (and spread the message across Twitter) to lay out a 5-part plan that includes hiring a Chief Security Officer in order to secure user data going forward.

They not only showed that they were addressing past security issues, but were willing to make major moves in averting future issues.

Blippy is far from out of the woods. They’re a young company for whom making all the right steps is crucial and this situation has generated a ton of negative ink for their brand. When success is measured in user share, anything that causes users to abandon ship puts your startup in a precarious position. Can Blippy bounce back and re-earn consumer trust? We’ll see.

Nestle is an example of why brands who jump into the social media space need a plan for managing their online reputation.
Greenpeace took Nestle to task for using palm oil sourced from Sinar Mars whose harvesting methods destroy rain forests and endanger orangutan populations. Get the full backstory via the Wall Street Journal

The environmental group created a spoof video where a person opens up a Kit-Kat and munches on bloody orangutan parts, while fellow protesters replaced their Facebook profile photos with altered Kit-Kat logos that spelled “Killer”.
The negative PR was bad enough, but it was how Nestle handled the situation on their Facebook Fan Page that turned this into a total #SocialMediaFail#.

They didn’t just try to control the message, they tried to censor the message

Censorship is the thing that social media users hate the most — right after the Twitter fail whale.
So when Nestle cited copyright infringement and got Google to pull the Greenpeace video from YouTube and then vowed to delete comments on their Fan Page that displayed the “Killer” logo, it was a little bit like spraying mace in the face of a rabid dog.

The numbers of “fans” swelled, but only to accuse Nestle of censorship and engage in a grade-school level of back and forth over deleted comments.

The snarky comments of an anonymous public relations representative via the fan page was the loudest conversation Nestle was having. A strong statement issued via blog or a YouTube video from the CEO explaining their position on palm oil use would have gone a long way. Instead, we got to witness an epic brand implosion on Facebook.

Nestle is an established company who doesn’t depend on the internet to find their customers, so this misstep won’t crumble their whole business; but their social media presence has definitely been tarnished. It’s time for them to regroup and decide how they can better handle negative dialogue in the social media space.

Whether you’re a startup or a multinational corporation, these PR snafus illustrate the need for a plan for online reputation management. Do it before you need it.

What Do Americans Do Online? Social Media and Online Gaming on the Rise

Lonely Planet Markets to Travelers in the Face of Disaster